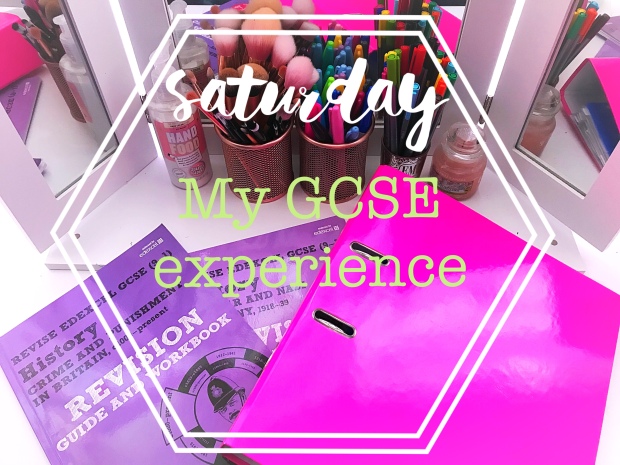 Hey guys! Well I bet you’re wondering where I’ve been, either that or you don’t care. But I’ve just finished year 11! So for the last 7 months or so I’ve been doing my GCSE’s and on Friday I finished high school. I feel a little bit old, a little bit nostalgic but mainly happy to have finished. So as most of you my age probably know, I had to deal with the new, very harsh GCSE’s graded 9-1 instead of A*-G. I thought I’d talk through every subject and how I’ve dealt with them in the new system so for anyone doing the new GCSE can know how to approach them! I’ll leave a translation below so you know what grade is what.

So I’m not a science fan anyway, but the new format really messed it up for me even more. So the worst thing about it is probably the equations you have to learn. I’m pretty sure there are around 15 equations just for physics. So be prepared to put them on some revision cards and start learning. A lot of A level content was also brought down to science to really test students. This was what I struggled with the most, I can do maths but the hardest concepts on the spec were what pushed my grade back. Please go into science knowing it will be difficult or you’re going to be shocked

The grade I expect after the exams:5

THE MOST STRESSFUL SUBJECT!!! So many people in my year took art as a ‘fun subject’ omg don’t. If you’re not willing to put in the effort, don’t take art. The first few months seem fun but fast forward to March year 11 and it’s hectic. The coursework load is ridiculous. The good thing about art is that it allows you to be your creative self. In year 10 we did portraiture and the stress to finish my drawings really took the fun out of art for me. However, I got to take a different turn for my exam and did photography, this meant that I could do different things and not get bored with the subject. My teachers were great though because there were so many students taking art, it meant that not every student got all the help they may have needed- take that in mind that you have to be quite indépendant and patient. The lack of personal guidance made it so that we also didn’t really know the grade we were headed towards. The art exam is also 10 hours so be prepared!!

The grade I want:7

The grade I expect after the exam:???

I had a love hate relationship with English language. So I love literature, and I love creative writing so language sounds perfect. But because we did English literature in year 10, language was a very brief subject and when we knew it, we knew it. When the technique was learnt the subject became quite boring. However I found love at the end of the exam when it came to writing a story or a speech. If you do the two English GCSE’s together, you will probably like this more as it theoretically a lot simpler but also a lot more boring if you’re doing it on its own.

The grade I want:7

The grade I expect after the exam:7

I almost don’t want to speak about this. Our class was messed about so so bad. Our original teacher was great, but she left around Christmas for nearly 2 months so we were stuck with substitutes when I was in year 10 and then left again in June so I didn’t have her at all for year 11. We were stuck with a substitute, who bless her soul was a lovely person, but could not control the class. It wasn’t until May time when we got another teacher. And even then we were basically just learning out of a textbook. However if it wasn’t for her I don’t know what I would have done. My flick about with teachers really ruined it for me because before I enjoyed history a lot. I was even considering taking it at A-Level. That’s not happening anymore though. The exam wasn’t great but it could have gone a lot worse, it was a real shame to be honest.

Grade I am expecting:6

So I don’t really have a dance background, I went to dance class when I was younger for a bit but that was it. Dance is a BTEC so not technically a GCSE but it’s the same level qualification. It really sparked an interest in me so much that I joined dance class again and engaged a lot. In my first two topics I got a Distinction so I was really happy. However, in my last topic, I got a Merit. This is still an amazing grade but with dance it’s important to remember that one grade really makes an impact. Even though I was an M3 (top merit), it’s still enough to make my final grade into a merit instead of a distinction, which is really disappointing. I’m not going to lie, I was heartbroken. Even so, I’ve enjoyed dance immensely and hope to carry it on as an A level. In dance you have 2 sets of coursework, which were probably my strongest bits. You also have two physical exams and a written one. The written exam is really important so make sure you brush up on your vocabulary!!

So this isn’t on the new GCSE yet but I thought I’d include it because it was one of my favourite subjects. I’ve loved it so much and if you get the option to take it, do. Sadly I’m not doing it at A Level because it’s not an option at my sixth form but I really enjoyed the GCSE. My teacher was amazing and always willing to help. We had one piece of coursework on a film in which we had to do an essay on the film (we did James Bond and gender) and then we had to make a film poster, and evaluate. The second piece of coursework- my favourite- was to make a magazine. I focused mine on photography and had so much fun on it, it was right up my street. The exam also wasn’t too bad as it was action adventure based. You watch a clip of a film four times and then have to answer a series of questions on it. Then on section B you have to answer questions about scheduling and audience pleasures on your chosen TV comedy that you would have picked earlier on in the year

What a stressful experience. Stressful but fun. My absolutely amazing teacher left after Christmas to go to another school (starting to realise how much I was messed about with teachers- going to blame this for my bad grades). I was gutted because she helped me so much. However we were handed to another teacher who was just as good. She was really kind and straight to the point. The bit that I struggled with the most in French was the listening, the writing was my strongest point. The issue I’ve found with French is it’s easy to find excuses to not focus on the most difficult things. I had a habit of focusing on writing instead of listening because getting listening set up was too much fuss. It’s two months of your life, just do it. (I sound like a Nike advert). I really enjoyed doing French but it is immensely difficult. You HAVE to put the effort in. If you don’t listen for just 1 lesson then you’re suddenly stuck behind a lot

I’ve done this last because I am not kidding, thinking about this subject makes me feel sick to my stomach. Maths is my favourite subject and it was my strongest. WAS. It’s the most important to me that I do well and I really don’t think I have. I came out of two of the exams crying, the last one really upset. I didn’t answer about 4 questions and the ones I did answer, I mainly didn’t get right when my teacher went over it. I cried for about two hours when I got home. Everyone thinks I’m over exaggerating when I say it was really bad but I’m not kidding, it was AWFUL. I need an A (7) to do it at A-level so that’s quite funny- except it’s not because I need maths. Ahh I’ll just update you about it on results day. Please don’t start to enjoy maths because it breaks your heart at the last minute.

They are all my subjects I’ve done at GCSE!! I’m pretty sure I’ve done them all anyway. To conclude, the new GCSE’s are hard, and unfair. But a bit of hard work really goes a long way, don’t give up! And to anyone who has just finished their GCSE’s or A levels- we are free! I hope you all get the results that you want on results day. Bye! X